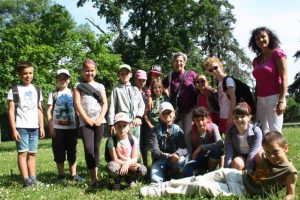 Do you like soup? Do you like sausages?  Do you like fish and chips? Yes, we do! Uttering these phrases softly but confidently, a group of young scholars rehearse everyday questions and answers. It is one of the enjoyable ways in which English language skills are being taught in this particular go-ahead school we are visiting in the Czech Republic.

Thanks to these cheerful question sessions, pupils aged 10 and 11 can string together sentences in a natural and relaxed manner, and are already comfortably on the path to becoming able linguists. Listening to them was a pleasant education for us too, when we were welcomed to a well appointed school in the small town of Moravský Krumlov, 51 km southwest of the republic’s second largest city, Brno.

The 200-pupil academy – which has as its endearing logo a wise owl – is základní škola (elementary school) Ivančická. It educates children from reception up to the age of 15. 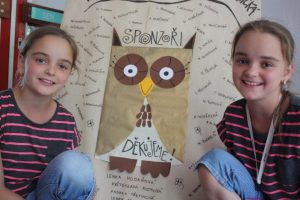 Thanks to the encouragement of committed, skilled and passionate teaching staff, learning English is to these children just a stroll in the park – and as they are taken on accompanied rambles in the nearby wooded estate of the town castle, the children are coached to identify the English words for trees and other landscape features to expand their vocabulary.

In practical terms, staff members such as Hana Štěpánová (responsible for the 3rd Class) are keenly aware of the dominant role of English in the world of transport, trade, finance, communications and technology, and that the new generation stands a better chance of securing worthwhile employment if furnished with this valuable asset.

Ms Štěpánová’s class activity is a model of dedication to constructive work and play, and the students individually are world-class examples of intelligent, engaging and courteous girls and boys. They will be able to cope with whatever the future holds for them.

Setting off for walk in the park. Photo by Hana Štěpánová.

London and other centres in the UK and Western Europe have come to appreciate the many thousands of working-age people from central and Eastern Europe who venture far from home to experience a new life, take a positive economic role, and speak sparkling English, sometimes with scarcely an accent.

Given that they live in a close-knit community where outside of the facilities of their school there may be little opportunity to embrace English, the 10- and 11-year-olds impress with the facility with which they have relished the linguistic challenge. Ms Štěpánová speaks English to them at every opportunity, as she introduces them to the basics of various subjects and leads them in gymnastics and outdoor games, such as the trendy Disc Golf, in which players have to hurl a Frisbee-type plastic discus with the fewest possible strokes over a grassy course into a chain-link basket.

Ms Štěpánová and her colleagues plant the seeds of a language which is spoken as a mother or second tongue by some 1.5bn people, by familiarising their charges with the basics of numbers, colours, animals, parts of the body, clothes and so on. What is it? “What is it? It’s a/an…” “How are you? What’s your name” “What is your favourite colour, what is your lucky number” and so on – a standard instruction formula the world over, but the kids relish it when it is part of a fast-moving, fun day in their brightly-decorated classrooms. 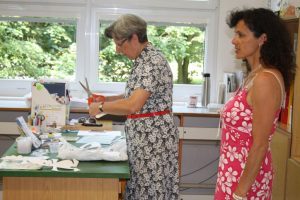 Among school projects is one called Global Storylines which brings in elements of drama to encourage pupils to explore complex issues at home and abroad. The class creates a fictional village and the story of a Giant, as a key to developing relationships with people around them and to critical thinking to deal with everyday problems. Ivančická School is one of the institutions pursuing the project in collaboration with the fair-trade business NaZemi, Masaryk University of Brno, and Glasgow-based West of Scotland Development Education Centre.

The school is a short walk from the centre of Moravský Krumlov, a settlement today of 7, 000 residents, which was made a royal town in 1260. The community has historic connections with the Lichtenstein family which in 1624 gained  the town along with other domains in eastern Moravia, staying until  the local branch of the family died out in 1908; in 1805 the town‘s Renaissance-style castle, successor to a fortification of 1279, was visited by Napoleon.

From 1963 for nearly 50 years, the castle housed the Slavonic Epopee or Slav Epic, comprising 20 monumental art nouveau oil paintings of Czech and Slav history, by Alphonse Mucha, who was born in Ivančice near Krumlov in 1860 and who died in Prague in 1939 after interrogation by the Gestapo. Through the Slav Epic Mucha aimed to remind the Slavs of their common history and inspire them to put their best qualities at the service of humanity. 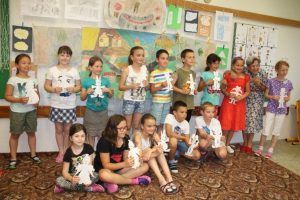 Despite protests from Krumlovians including a rally of 1, 000 people, the Slav Epic was in 2012 transferred to the Veletržní (Trade Fair) Palace in Prague. The city of Prague argued that the American benefactor Charles Crane – who among other endeavours helped finance the first oil exploration in Saudi Arabia – was the owner of the paintings and that he had donated them to the capital.

The painter lived for a time in Paris, where he designed innovative and glamorous advertising posters such as La Dame aux Camelias which have been reproduced on thousands of posters into the current era.

Moravský Krumlov may have lost possession of a part of its cultural heritage, at least for the time being, but its people are proud of the strides they have made through language education in understanding other cultures. Growing up from an early age, they are true, outward-looking citizens of the world.

The school has a comprehensive, photo-filled website at http://www.zsivancicka.cz